Year One And Not Done

I haven’t written here since December 2014.  That’s a long time to go without an update, I know.  Who would have thought that the first year in law school would be so…busy?  Okay, I did. Everyone told me it would be. 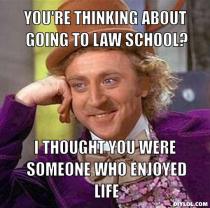 It’s true. Your life ends the moment you enter the first orientation workshop.

And then it began.

Contracts I, Crim Law, Legal Writing (yes, three classes because I’m part-time. I’m not that crazy).  I joined everything. Tried to do everything.  I ended up doing just what I needed.  Different SBA orgs, study hours.  It was enough for me.

Goals. I set lots of goals.  I didn’t quite meet them all.  Here’s the thing about law school: It’s not your average ballgame. It doesn’t matter if you were queen bee at your old school.  It won’t matter if you were the big man on campus, top of the class, president of every club, etc.  If you work, it won’t matter that you were the go to person for your department.  It won’t matter because EVERYONE is a gunner, a go-getter.  Everyone is fiercely competitive.  Here’s the biggest thing: Everyone can’t get an A. Remember in high school or elementary school where everyone who had the grade can get an A?

Not in law school!  In my 1L year I learned that there can only be a certain number of A grades. That number varies by class but one thing is constant: You better have the top of the top grade and great in-class contribution to secure that A-spot.  It’s because we are graded on a curve and the grades will fall along that curve. It’s not uncommon for a B+ to jump to an A or even down to a B.  So we gun. We compete. We go to office hours, TA hours, make study groups…we fight (academically of course!). 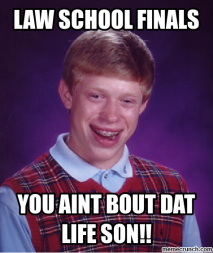 You have no idea

Did you know that the only grade you get for the semester is from your final exam? Thought you’d get a push because of perfect attendance? Ha! Even the midterms (if there are any) are ungraded.  That’s another thing.  Midterms are like a mini-final.  It has all the stress of a final, it’s taken like a final, and you will get the same feedback from professors as a final.  You just won’t get a grade.

And that’s IF you get a midterm.  Back to finals.

It’s hell week all over again.  For the last month every student, at least us 1Ls are taking up every corner of the library.  Study rooms become prime real estate and you hear this word “outlines” being thrown around.  To the average person, “outline” probably just means a skeleton of notes.  To the law student, outlines are gold. No. They are diamond encrusted gold.  A good outline (that you actually worked on for yourself) is what gets you closer to that coveted A.

And then it’s over.  First semester ends.  Enter Freedom.  Not complete freedom of course.  That’d be too easy.  Remember, classes begin again in just a few weeks and it all begins again.

Second semester was much like the first with the added bonus of mandatory LAWS rounds.  Yes that yearlong writing requirement? Not only does it include 15 page briefs, but it also includes a weekend mandatory public speaking!  I can’t lie though.  I thoroughly enjoyed that part.  I’m in the Trial Advocacy track and this was my chance to do something I love: public speaking. It was great. It was wonderful and I decided to continue subjecting myself to the extra pressure and participate in the Intramural competitions.  GUESS WHAT?! I made it to the Semi-Finals!  I still think if I had just did my prosecution argument in that round I had a chance at the Finals.  I did well though!

But the work didn’t end.  We still had our doctrinal classes.  Once our final brief was submitted, it was just a matter of topping off our other classes.  That fateful day came in May.  I walked into my Torts final. The skies were grey.  I walked out. They were greyer.  It was  a sign.  I would spend the next several weeks obsessively checking my student portal for my Spring grades and rank while also trying to conquer this summer class.  Yup!! Who needs a summer break? Not this girl.

Did I mention I started volunteering with a legal service in February? Because THIS girl is a mental masochist.  The point is I survived.

I survived 1L and I’m ready to do it all over again.

Here’s to us law students and our futures.

It’s SATURDAY!!!!  Almost one full week since I began this journey.  Almost 7 full days since I made a decision to be a better me.  I’m not sure I’d call today a cheat day or not. I didn’t have sweets, I kept the calories fairly low and I worked out.

Tomorrow is an early day and then just an early week at work all around.  I did the worst thing I could do: I brought my work home with me! And then didn’t touch it -_-.  It’ll get done. Tomorrow is another day, right?

I don’t know. I feel pretty good. I’m proud of me. I’m proud of my workout buddy. Yeah, we slip up but, it’s a work in progress.  All I can say is that if you have a goal, do all you can to get to it.  Of course it’s important that you make sure those goals are realistic.  The last thing you want is some out-of-reach aspiration and do all this hard work to get there, not get there, quit.  No.  I learned a long time ago it was important to set your goals and then set subgoals (those little things you need to do to get to the finish line).  But then, don’t stop there.  What happens when that goal is complete? Do you just … stop?

You make another one.  So. My Goal 2.1 is: after reaching an acceptable weight, I have to maintain it. Sounds simple, but it isn’t.

How’s it rolling world? What are you doing for you? 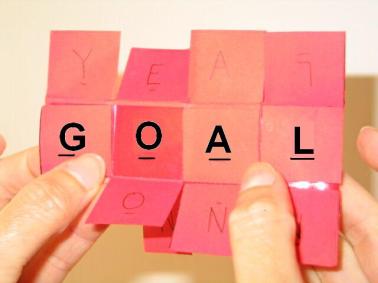 Goalsetting – so simple yet so hard. It’s easy to say “Yeah, I wanna be in shape!”  But that’s so vague.  What exactly are you trying to change? Is your goal to have the beach body? Is it to gain muscle and be Arnold ripped?  Is it something a little less superficial (not that hotbods are wrong)?

What exactly is my goal?

That’s what you have to ask yourself.  Knowing where you want to go makes it easier to plan how to get there. Example: I want to go to be a lawyer. So I have to go to law school (duh!) and to get in I have to do certain things.  Example: I want to be in-shape, but I don’t care about the beach body. What do I need to do?  Well, first is make some major changes.

Three days in and I think I’m doing quite well.  That’s 18 more days until technically a habit is formed. Major change one: eat right.  NOT eat less, but eat RIGHT.  I think that’s why so many diets fail.  No one ever said losing weight meant cutting out food and depriving your body.  Moderation, right?  All in moderation.  That doesn’t mean eat cake once a week because you used to do it twice a week.  It means don’t deprive your body of certain (usually good-for-you) foods because then you deprive your body of needed nutrients.

Major Change Two: Be active! Your body, our bodies, need activity.  It’s not enough to just eat well.  You have to DO something.  If not, then all that good-for-you food will just store up as extra calories and well that means fat. That was the next change on my way to my fitness goal.  So far so good.

Notice I haven’t yet put a number on my goal.  That’s for two reasons. One: I think that’s a lot of pressure. I’d rather count sizes than pounds.  Two: I don’t have access to a scale that will accurately weigh me.  Remember, I’m an amputee and can’t use a standard scale. I need a chair-scale, a roll-on scale or a bed-scale.  All of which are not readily available to me. SO! I’ll just track my size changes.  That will be easy since I have at least three different sizes in my closet.

This can be done! Now, just reach the goals. Make a plan. I’m sure there are some flaws in mine but, I’ll keep doing trial-and-error. I know what works for me and what doesn’t work. I know my abilities and limitations.  That’s important! Just because ABC wheelchair user does something doesn’t meant that I can.  And just because I can, doesn’t mean ABC can.