A message to Trump: You’re Fired! (I hope)

I’m a firm believer that dreams mean something. Dreams communicate messages to us. They confirm feelings. It was a dream that told me my eldest sister was going to have a second child and it would be a girl (because I chose Big Red over Winterfresh in a flooded choir stand). It was a day dream that told me my grannie wouldn’t see the end of 2003 when I passed by a cemetery during Christmas break (She died three hours later). It was a dream that let me know that same grannie was at peace and I could let her go.

END_OF_DOCUMENT_TOKEN_TO_BE_REPLACED

Posted in Life. Bookmark the permalink.

Your Fatphobia Is Dangerous

People like Jillian Michaels and Fatshaming Twitter is why I nearly developed a full blown eating disorder.

END_OF_DOCUMENT_TOKEN_TO_BE_REPLACED

Posted in Uncategorized. Bookmark the permalink. 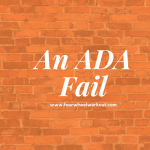 Recently, I and a friend got into a “discussion” with someone who felt it was the government’s job to provide accessibility, not a business owner’s.  This person’s mind could not be changed, no matter how many disabled people spoke up and spoke out.